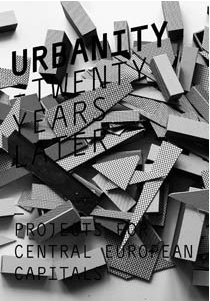 Urbanity Twenty Years Later is a long term research project which is rediscovering Central European urban values. The project is regional aiming to find answers for the future of our cities as such. The first publication of the Urbanity project presents thoughts of upcoming architects about the city and it's potential. A team of architects, photographers, sociologists, architecture students, non-government organizations and others joined more then 150 participants working on visions for Berlin, Bratislava, Budapest, Ljubljana, Prague, Vienna and Warsaw. Guest critic Elia Zenghelis pointed out that "Urbanity Twenty Years Later is going beyond official education where political awareness is treated like the hot potato".