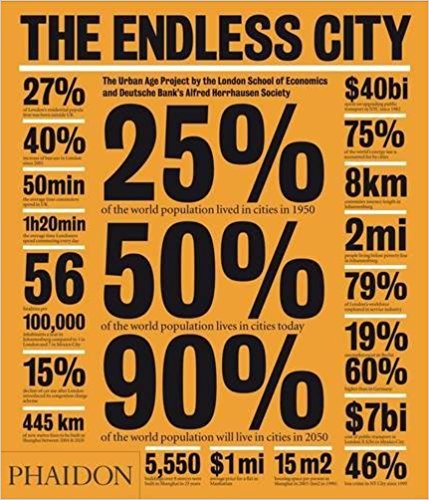 The Endless City presents a unique survey of the contemporary city at the beginning of the 21st century. It includes a wealth of material that has emerged from a sequence of six conferences held by influential figures in the field of urban development and its related disciplines, and examines the requisite tools for creating a thriving modern city. The book has been edited by Ricky Burdett and Deyan Sudjic in collaboration with one of the most important educational institutions in this field, the London School of Economics, which assures that the information and data provided is reliable, accurate and informed. Taking 6 key cities as its focal point: New York, Shanghai, London, Mexico City, Johannesburg and Berlin, The Endless City discusses in depth not only the infrastructure and architectural expansion necessary for continuous urban growth, but also the social and economic factors that are critical to urban development in the 21st century. Clearly organised into separate sections for each city, the book will have a strong visual impact and make detailed scholarly research straightforward and manageable. Images of each city will complement the discussions and enrich the discussion presented in the text. With contributions by experts in urban development, this book will appeal to architects, city planners, economists, students, politicians and anyone with an interest in the future of our cities.