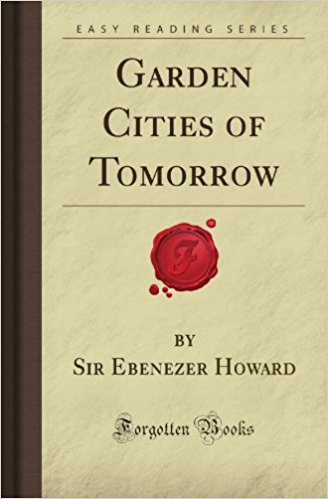 Garden Cities of Tomorrow
May 2008
By Sir Ebenezer George Howard

Among the many 'utopian' proposals of the 19th century, this particular short text stands out. Howard was a 19th century British reformer and city planner. He was influenced by Bellamy's Looking Backwards. He saw new, planned towns as a necessary counterbalance to the squalid, Dickensian 19th century London. These towns would balance urban and rural occupations, and include a whole range of amenities which we have come to take for granted: libraries, museums, schools, wide avenues, and a mix of commercial and residential zones. Howard strove to keep a balance between the community and individual needs, and to operate within the framework of Capitalism, rather than rejecting or attempting to replace it.

This book was originally published in 1898 as To-morrow, and reissued in 1902 as Garden Cities of To-morrow. The first Garden City, built under the aegis of Howard, Letchworth, was founded in 1903 (Howard was one of the first residents). Later he founded a second Garden City, Welwyn, 1919. Both, now London suburbs, are still very much in existence and proved successful over time, with its residents, in particular, in better health than the general population. Howard's proposal had a great influence on urban planning in the 20th century, particularly post-WWII. The American urban planning critic, Lewis Mumford, was one of Howard's proponents. In the history of planned societies, Ebenezer Howard stands out as one of the successes, even though he is little-known other than to architects and urban planners.