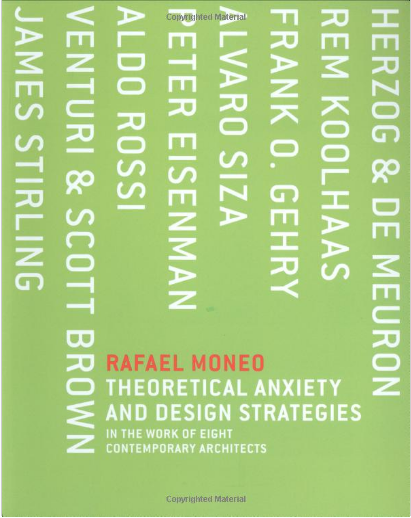 The internationally acclaimed architect Rafael Moneo is known to be a courageous architect. His major works include the Houston Museum of Fine Art, Davis Art Museum at Wellesley College, the Stockholm Museum of Modern Art and Architecture, and the Potzdammer Platz Hotel in Berlin. Now Moneo will be known as a daring critic as well. In this book, he looks at eight of his contemporaries -- all architects of international stature -- and discusses the theoretical positions, technical innovations, and design contributions of each. Moneo's discussion of these eight architects -- James Stirling, Robert Venturi, Aldo Rossi, Peter Eisenman, Alvaro Siza, Frank Gehry, Rem Koolhaas, and the partnership of Jacques Herzog and Pierre De Meuron -- has the colloquial, engaging tone of a series of lectures on modern architecture by a master architect; the reader hears not the dispassionate theorizing of an academic, but Moneo's own deeply held convictions as he considers the work of his contemporaries. More than 500 illustrations accompany the text.

Discussing each of the eight architects in turn, Moneo first gives an introductory profile, emphasizing intentions, theoretical concerns, and construction procedures. He then turns to the work, offering detailed critical analyses of the works he considers to be crucial for an informed understanding of this architect's work. The many images he uses to illustrate his points resemble the rapid-fire flash of slides in a lecture, but Moneo's perspective is unique among lecturers. These profiles are not what Moneo calls the "tacit treatises" that can be found on the shelves of a university library, but lively encounters of architectural equals.