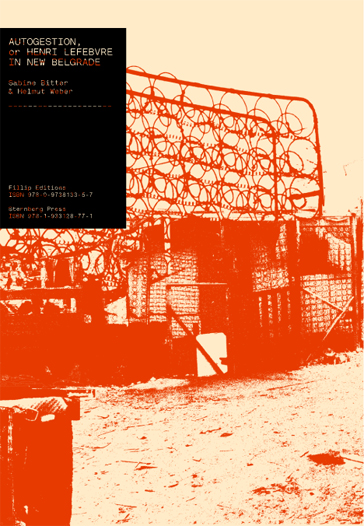 The artist book by Sabine Bitter and Helmut Weber is based on an unpublished original text by French philosopher and urbanist Henri Lefebvre which is printed as a facsimile. This central text is contextualized and interpreted by accompanying commentaries and texts by Ljiljana Blagojevic, Zoran Eric, Klaus Ronnberger, and Neil Smith.

The text from Henri Lefebvre was submitted as part of a proposal with French architects Serge Renaudie and Pierre Guilbaud for the International Competition for the New Belgrade Urban Structure Improvement in 1986, sponsored by the state of Yugoslavia. In his urban vision for New Belgrade the capital of former Yugoslavia founded in 1948 Lefebvre emphasizes the processes and potentials of self-organization of the people of any urban territory to counter the failed concepts of urban planning from above. For Lefebvre, at this late point in his life, the promises of both modernist capitalist as well as state socialist architecture and city planning had failed. Yet, Lefebvre viewed New Belgrade and Yugoslavia as having a particular position in what he has elsewhere called the urban revolution; As Lefebvre states, ; because of self-management, a place is sketched between the citizen and the citadin, and Yugoslavia is today [1986] perhaps one of the rare countries to be able to pose the problem of a New Urban.