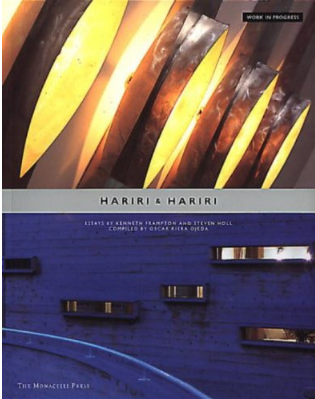 Hariri & Hariri exemplifies the spirit of the emerging generation of architects. Gisue Hariri and Mojgan Hariri, Iranian-born, Cornell-educated sisters, opened their New York City practice in 1986. At that time, writes esteemed architectural historian Kenneth Frampton, their work "first broke upon the New York scene, with the publication of a single spiral staircase executed in bent plate steel . . . an archetypal modern image set in a different key."

Since then, the Hariris have designed a great variety of projects that add tonal and thematic variation to the unique notes in that "different key." They are working, says one commentator, "in a twenty-first century, space age mode." Thirty of their works are shown in this book, including a number of apartment renovations in New York, several houses throughout North America and Europe, competition entries (for both theoretical and commissioned projects), and custom furniture and lighting for many of the interiors, some of which are now in production.

The projects are organized around a number of important themes that have influenced the design and practice of the architects: politics and power; global culture; new technology; gender and identity; composition, construction, and materiality; paradoxical reality; and otherness. The themes are also highlighted in a dialogue between the Hariris that runs throughout the book, highlighting their philosophy and thoughts on architecture and contemporary culture: "What is important in terms of cultural connection is the spirituality of Eastern thinking, which we are evaluating in the West, or rather from which we are evaluating the West."